Abaqus is a software suite for finite element analysis and computer aided engineering.

Load the module and see the version informations:

Look >>>here<<< for more information about abaqus and especially this PDF document about the license model of abaqus.

But in short, the following table shows the token usage for a number of cores for an abaqus job. 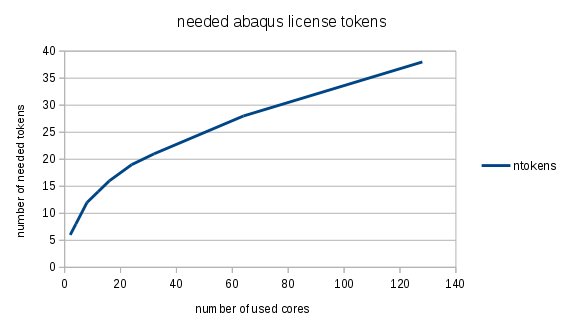 I'm not able to see my model in abaqus cae, I only get a "blue" screen.

open abaqus cae with MESA support ( thanks to Mrs. Toups for the tip ). For this use "abaqus cae -mesa" instead of "abaqus cae". This can be done via

I'm getting an error: Abaqus Error: The following file(s) could not be located: ....inp

Don't name your input file $JOBNAME.inp, it got deleted! Also make sure that you did use an existing .inp filename and the right path.

Use separate directories for each job, abaqus_v6.env got overwritten by another starting job!

I'm getting an error: "..." license request queued for the License Server. Total time in queue: ... seconds.

Too many licenses have been checked out. The Slurm scheduler does not check if free abaqus licenses are available before a job is started. Unfortunately, if no license is available, abaqus does not directly abort but waits until a license becomes available. From Slurm's point of view however, the job is running and will therefore be accounted as usual.

So only let one or at least a few jobs run at one time. This could be done with job dependencies or with array jobs.